al Amana Microfinance is a non-­‐profit organization, governed by the dahir of 15/11/1958 and the laws 18/97 and 58/03 concerning the activity of the micro-­‐credit. It was founded on February 13th in 1997 and approved as an Association of microcredit by the Ministry of Finance on March 31st in 2000. Leader of the sector of the microfinance in Morocco, al Amana Microfinance has, at the end of June 2016, a network of more than 598 points of service among which 233 in the urban and outer-­‐urban areas, 279 in rural areas and 86 mobile vehicles serving the most landlocked zones. al Amana Microfinance offers financial products such as: the solidarity loan, the individual loan to companies, the individual loan for accommodation or housing, intended for the promotion of the generative activities of income, for the improvement of the accommodation or to ensure its connections with the electricity or with the drinking and potable water. Al Amana's Microfinance offer includes also non-­‐financial services of training, accompaniment, and support for the marketing and for the visibility of the products of its customers. At the end of 2015, al Amana Microfinance served 3.943.993 loans of a global amount of 29 billion dirhams for the benefit of 1.484.122 customers.

Its mission is to be an important actor of the economic and social development of our country by the lever of the financial inclusion.

Its vision is to be the reference institution in microfinance, preferred by its customers, serving the largest possible number of beneficiaries, offering diversified and innova4ve services, successful financially and having a strong social impact.

The values of al Amana Microfinance focuses on:

al Amana Microfinance's offer includes financial services and not financial services. The range of the financial products comes in several types of microcredit: the individual and solidarity loans intended for the generative activities of income, but also loans for accommodation. The approach of the institution regarding microcredit is based on a double objective: promote micro projects but also strengthen the capacities of entrepreneurship and empowerment of the beneficiaries. This offer includes besides the transfer of money and the micro‐insurance. The offer also includes non­‐financial services. It is about the training / formation and the customers micro-­‐computing entrepreneurs support. These basic trainings help the beneficiaries to understand diverse aspects of the products, which they contract. Other trainings are provided concerning the financial education, the management and job trainings. al Amana Microfinance also go with its customers through support services in the marketing and in the visibility of products. The exhibition until the sale of products, the customers benefit for free from various services: a space of exhibition on our Web site, stands provided in various shows, fairs, and a material and logistic support to participate in the regional meetings organized by the Center Mohammed VI of support for the united microfinance.

The evaluation of the social dimension of the microfinance represents a long-­‐term basic trend which marks the sector at an international level over the past few years. A trend that is translated by an evolution of the range of services and products in order to adapt itself beber at the beneficiaries request, serve more users, limit the non-­‐refunds and avoid the over-­‐indebtedness. In sync with this dynamics, al Amana Microfinance stabilized a model of development that aims to strengthen and consolidate its social mission. The institution strengthened the social dimension of its governance by establishing in 2013 a commibee called " Strategy and Social Utility " that is in charge of the piloting and the management of the social performance of the institution and connected with the executive board. The missions of the commibee " Strategy and Social utility " include: being aware of certain impact indicators and guiding direct actions carried out to strengthen the inclusion and the financial education of the customers. Watching the execution of the social mission and oversees the management of the social performance is also another mission of this commibee.   As such, it defines the objectives and the social indicators of the institution and ensures appropriate follow-­‐up through a regular social reporting which allows to measure the progress of the institution in this domain. Registering its activity in the initiatives and world best practice of the microfinance, al Amana Microfinance was one of the first 13 signatories of the smart campaign, the world’s campaign of protection of the customers of the CGAP (consultative group of assistance to the poor people of the World Bank). And since 2013, al Amana Microfinance is a member of the initiative of the universal standards of management of the social performance (USSPM) launched by the Social Performance Task Force ( SPTF). The notion of social responsibility in al Amana Microfinance does not limit itself to simple general principles. It consists in ensuring that the services supplied to the beneficiaries have a positive impact on them and their family, and that they do not damage the environment and the community. To measure beber the social impact of its services, the institution uses diverse assessment methods which are relevant to the appreciation of the economic level of the users. The figures of the annual report of 2015 as well as several regular studies come to support the knowledge of the impact of the microcredit on the customers.  In the same register, al Amana Microfinance works actively for the raising awareness of its customers on the environmental standards and safety and on the promotion of human rights, in particular those of woman and children. 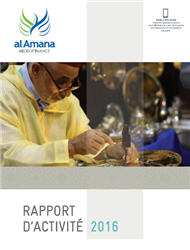 Questions ?
Send us a message !

Complaint Post a claim online
Free call Leave us your number, we'll call you !
Messaging Questions ? Send us a message !